What Is Antimicrobial Resistance (AMR)?

- Tackling Global Threats and Aiming to Create a Sustainable Society -

Antibiotics, a type of antimicrobial agents that targets bacteria, are essential drugs in modern medicine and healthcare. However, antimicrobial resistance (AMR) has become a major global problem, which has developed as a consequence of the increased use of antimicrobial agents (especially antibiotics). As a healthcare company, Sysmex recognizes the importance of countermeasures against AMR and is engaged in a range of related activities. These include the development and continuous improvement of testing instruments and diagnostic techniques, as well as academic educational endeavors, with the aim of realzing a sustainable society. As an integral part of this, Sysmex is disseminating information so that as many people as possible can gain a clear and accurate understanding of AMR. 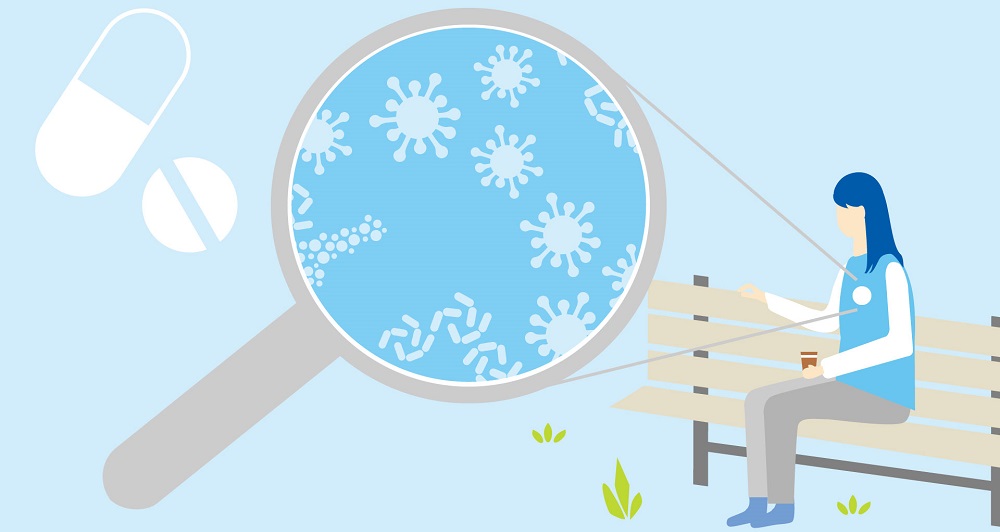 The Causes of Antimicrobial Resistance Lurk in Our Immediate Surroundings

Antimicrobial resistance (AMR) occurs when antimicrobial agents become less effective or totally ineffective over time due to overuse or inappropriate use. Inappropriate use refers to the failure of taking a drug for the prescribed period, or not taking the correct dose. For example, a patient may choose to take an antibiotic only once a day instead of twice a day as prescribed by a doctor or pharmacist. Or, a patient does not continue taking the drug for the prescribed period, i.e., the full course could be five days, but the patient stops taking the drug after just one day because the symptoms have improved. In such cases, antibiotics cannot kill the harmful bacteria in the body  completely, and those that survive can become drug resistant.

When drug-resistant bacteria proliferate in the body, antibiotics become less effective, making it difficult to treat infections that would otherwise be mild and reversible. This resistance can develop to a point where these infections become increasingly severe or even fatal. AMR is a universal problem that can affect anyone, and it is not confined to a particular group of people or region.

In 2013, at least 700,000 people worldwide died due to AMR, and if no action is taken, the number is expected to rise to 10 million by 2050.1 Moreover, the treatment of infections caused by AMR requires prolonged hospitalization and expensive drugs, imposing an extremely heavy financial burden.

There is also a concern that there may be a “silent pandemic,” in which someone who is a carrier of drug-resistant bacteria but has not developed an infectious disease unknowingly spreads the infection through contact with others, ultimately leading to drug-resistant bacteria being spread widely throughout the world. In light of this situation, various organizations including the World Health Organization (WHO) have positioned AMR as a social challenge that should be addressed worldwide. They are actively conducting awareness-raising activities to ensure the proper use of antibiotics and prevention of infection. Tackling the global threat of AMR will also help achieve Sustainable Development Goals (SDGs) aiming at the realization of a sustainable society. 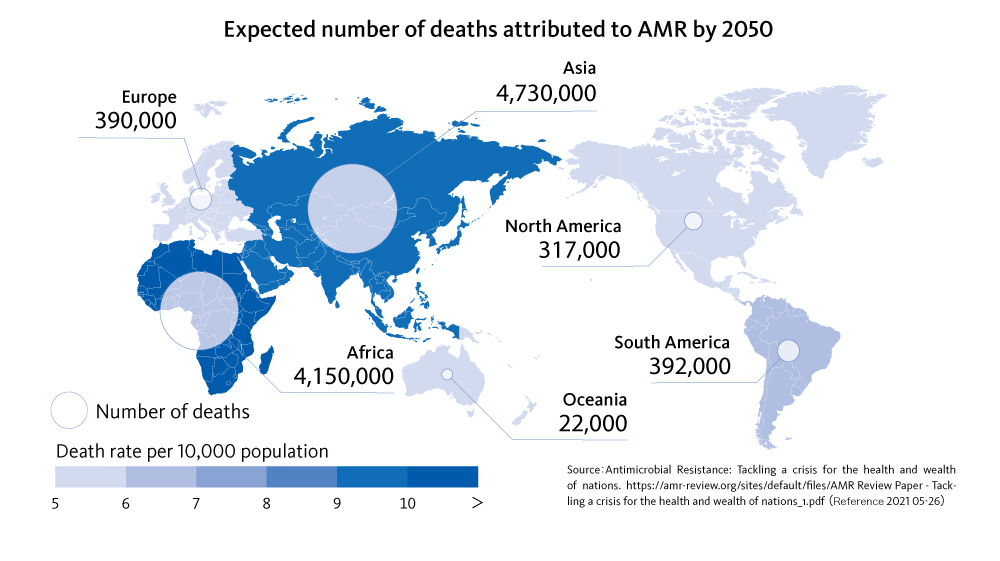 Quick Testing Leads to Proper Use of Antibiotics

While antibiotics are used in many different situations to treat and prevent infections, they are often prescribed incorrectly, such as prescribing them in cases where they are not necessary or are ineffective against the causative pathogens. In 2019, it was reported that 43% of antibiotic use in the United States was inappropriate.2 Thus, ensuring the proper use of antibiotics has become a matter of urgency.
For these agents to be used correctly, rapid screening in a clinical setting is necessary. Doctors can treat infections effectively by establishing the type of bacteria causing the infection and whether the bacteria are drug resistant. It is also necessary to determine whether the patient’s symptoms are due to a virus or bacteria, since antibiotics are ineffective against viral infections.
2 Source: Ray MJ, Tallman GB, et al. Antibiotic prescribing without documented indication in ambulatory care clinics: national cross-sectional study. BMJ. 2019 Dec 11;367. 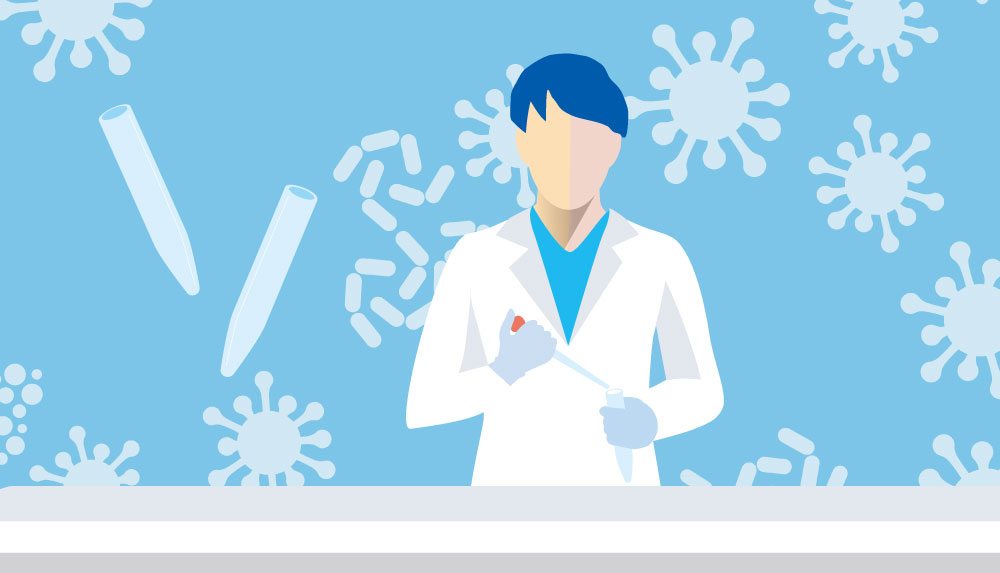 For example, urinary tract infection (UTI)   are caused by bacteria growing in the bladder. AMR is also a concern in these infections, which are relatively common, with about 60% of women being affected at least once in their lifetime.3 In many cases of UTI, medication is given based on symptoms such as fever, and it has been reported that antibiotics are sometimes administered even when bacteria in the urine are absent.
Sysmex assists in the diagnosis of UTI with urinalysis equipment. It can detect bacteria, white blood cells, and other substances in the urine in about one minute. At the same time, reference information on the nature of the bacteria is provided, which helps avoid the unwarranted use of antibiotics, leading to the early introduction of appropriate treatment.
Moreover, if urine tests can quickly determine which antibiotics are likely to be effective, the correct agent can be selected. Sysmex is working with its partners to establish new rapid testing technologies and to develop products that can also be used in the selection of therapeutic agents.

For People’s Health and a Bright Future

Sysmex’s initiatives to prevent AMR go beyond the provision and promotion of its products. As a manufacturer involved in clinical testing, Sysmex has been focusing on a range of measures, such as the global #AMRfighter campaign to raise awareness about AMR and dissemination of educational brochures in order to contribute to the achievement of the SDGs, especially “good health and well-being (Goal 3).”
Sysmex remains committed to preventing the occurrence and spread of AMR to ensure that everyone around the world can lead healthy lives every day.

Aiming to Prevent AMR
What should we keep in mind to prevent the occurrence and spread of AMR? The following are six measures you can take in your daily life.

Sysmex provides an educational brochure to help increase understanding of AMR. The brochure provides information on the global spread of AMR, countermeasures against AMR that can be taken on a routine basis, and the importance of AMR-related tests. 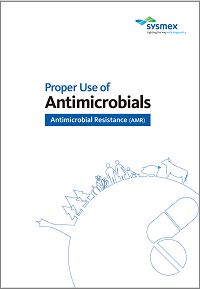