The Japanese Breast Cancer Society’s Breast Cancer Clinical Practice Guideline has described a lymph node metastasis testing system for breast cancer using the OSNA™ method as an alternative to the H&E staining test2 for the pathological testing of sentinel lymph nodes, in addition the system is also recommended outside Japan by the Spanish Society of Senology and Mammary Pathology and the U.K. National Institute for Health and Clinical Excellence. The system has been introduced at more than 300 medical institutions in Japan and overseas, where it is playing an important role in helping doctors determine treatment methods.
GLOBOCAN 2018, issued by the International Agency for Research on Cancer (IARC) of the World Health Organization (WHO), projects that the number of breast cancer patients around the world will reach approximately 2.6 million by 2030. In China, where the number of breast cancer patients has been trending upward recently, the number of new patients numbered around 370,000 in 2018, making breast cancer the fifth-highest cause of death among women.
In treating breast cancer, the use of lymph node metastasis testing plays an important role in the selection of surgical methods and the determination of other treatment methods. With conventional testing methods, the pathologist prepares pathological samples from surgically removed lymph nodes, and then views those samples under a microscope either during or after the surgery to determine whether the cancer has metastasized. Problems with this approach are that it relies heavily on the quality of the prepared pathological samples, and accuracy may differ from pathologist to pathologist.
On December 9, 2019, Sysmex received regulatory approval from China’s NMPA for LYNOAMP™ BC, an in vitro diagnostic reagent, as a new product in the Class III category managed under the strictest safety and efficacy requirements. Accordingly, Sysmex is currently creating a framework for introducing into the Chinese market a breast cancer lymph node metastasis testing system using the OSNA™ method, comprising LYNOAMP™ BC and the RD-100i gene amplification detector.
Breast cancer lymph node metastasis testing systems using the OSNA™ method, a proprietary Sysmex technology, can determine within around 30 minutes whether lymph node metastasis has occurred. Accordingly, our technology can be used in lymph node metastasis testing for intraoperative determination of the resection area. This can prevent the need for subsequent surgery, reducing the burden on the patient and lowering the risk of recurrence. Furthermore, automation and simplification mean that testing is less dependent on operator skills and provides more objective testing results, reducing the burden on pathologists and standardizing breast cancer treatment.
Our system to test for breast cancer lymph node metastasis using the OSNA™ method has received regulatory approval in China for the first time for lymph node metastasis testing using a molecular biological technique. Going forward, we are targeting early-stage market introduction and uptake of this system throughout China in order for it to be recommended in China’s breast cancer treatment guidelines.
Though the creation and global dissemination of high-value testing and diagnostic technologies, Sysmex is contributing to advances in personalized medicine and the standardization of treatment in the field of cancer. 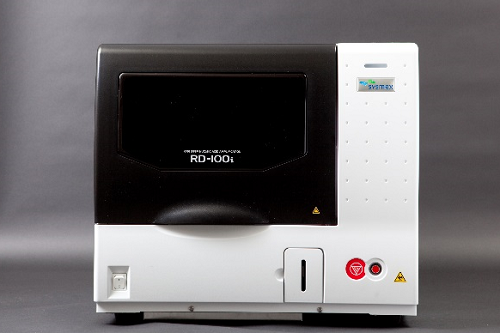