Hemostasis testing, which examines the ability of the blood to coagulate or not to coagulate, plays an important role in diagnosing diseases such as hemophilia and liver cirrhosis, and can help determine hemorrhagic tendency prior to surgery. The early 1980s saw progress in the automation of testing, but demand has grown for further increases in measurement sensitivity and precision.
The CA-100, which Sysmex developed and launched in 1984, allowed measurement status and specimen abnormalities to be determined easily by employing a function for graphically displaying the coagulation reaction process, as well as achieving high levels of measurement sensitivity. The CA-100 was also the world’s first blood coagulation analyzer equipped with a quality control function, which led to higher levels of measurement precision and provided stable test results.
Sysmex took the lead over its competitors in offering such functionality, which has now been widely adopted by other companies’ blood coagulation analyzers and remains an industry standard.

Going forward, through research and development to further enhance testing quality and efficiency, Sysmex aims to meet the rise in testing demand and the increasingly diverse needs in regions around the world, thereby contributing to the advancement of healthcare. 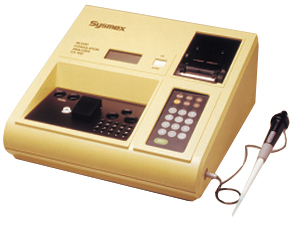