Sysmex Corporation (HQ: Kobe, Japan; President and CEO: Hisashi Ietsugu) is pleased to announce it has received the iF Product Design Award 2013, an independent German design award, for its XN-2000 hematology analyzer and XN reagents.

Sysmex has won the iF Product Design Award 2013, for its Automated Hematology Analyzer  XN-2000 and XN reagents. With a history extending back more than 50 years, the iF Design Awards are some of the world's most authoritative, with a judging panel carefully selected from around the globe. The award is given for industrial products that score highly in such areas as design, quality, functionality and innovation.

The "Silent Design®" concept employed in the XN-2000 and XN reagents received the Good Design Award 2011 (Japan) and has earned high acclaim both in Japan and overseas.

In the past, in vitro diagnostic systems have typically focused on improvements in functionality and performance leading to advances in testing speed and accuracy. In addition to such functionality and performance improvements, Sysmex's new "Silent Design®," concept enhances instrument usability by clinical laboratory technicians. "Silent Design®" is employed in such products as the XN-Series, launched in 2011 for the hematology field.

Going forward, Sysmex will continue employing the "Silent Design®" concept to deliver products that are environmentally friendly and even easier for customers to use. 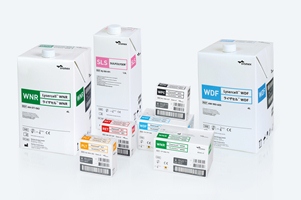 Note: Products winning the fiscal 2013 awards will appear on the iF Design Awards website on February 22, 2013.


Back to "Press Release"