Launch of a New Model in the Hemostasis Field,Automated Blood Coagulation Analyzer CS-5100

- Aiming to Boost Sysmex’s Market Share in the Hemostasis Field -

Sysmex Corporation (HQ: Kobe, Japan; President: Hisashi Ietsugu) announces its launch of the CS-5100, a fully automated coagulation analyzer. The top-end model in Sysmex’s CS series of coagulation analyzers, the CS-5100 is capable of high-speed handling of tests such as those that include D-Dimer, a parameter for determining thrombotic tendency. The instrument contributes to testing efficiency through its ability to handle mixed testing types*1, including capped blood-collection tubes and pediatric samples, which allows only small sample volumes to be tested.

In recent years, changing eating habits have led to an increase in lifestyle-prompted thrombotic diseases, such as myocardial and cerebral infarction. According to a study by the World Health Organization (WHO), arterial sclerosis now ranks along with cancer as one of the leading causes of death worldwide.
In the past, hemostasis was primarily used in the testing of hemorrhagic tendency to determine hemorrhagic disorders, such as hemophilia. Nowadays, however, an increasing number of tests are performed to determine thrombotic tendency and for healthcare monitoring. This trend has prompted an expansion of the global market for hemostasis. The rate of growth is particularly high in China and other emerging markets that are enhancing their healthcare environments, spurred by economic growth.
In 1995, Sysmex entered into a distribution agreement with Siemens Healthcare Diagnostics Inc., which has a leading share of the market for hemostasis reagents. The two companies conduct sales activities globally, maintaining the top global market share in the hemostasis field.
With the launch of the CS-5100 fully automated coagulation analyzer, Sysmex has optimized throughput when combining routine and specialty tests including D-Dimer. The new instrument is capable of testing at around three times the speed of previous CS series instruments, handling approximately 300 tests per hour.*2
Furthermore, the new model allows for safe and efficient simultaneous mixed testing through a function that allows measurement without removing the caps on blood-collection tubes and the testing of minute quantities, such as for children from whom only small samples can be collected.*1
vWF:RCo (von Willebrand Ristocetin Cofactor) and vWF:Ag (von Willebrand Factor Antigen) can also be measured, allowing for determination of whether hemorrhagic symptoms stem from hemophilia or von Willebrand disease and allows diagnosis of the von Willebrand disease type, helping to determine what sort of drug should be administered to patients.
In the future, we expect to further raise overall lab efficiency by adding a connectivity function to specimen transport lines that will advance laboratory systemization as well as improving test traceability.
Leveraging Sysmex’s strengths, in the future, we will continue conducting R&D to increase testing parameters and making testing more efficient, as we aim to boost our share of the hemostasis market by leveraging the global networks of Sysmex and Siemens Healthcare.
*1 May not apply, depending on settings.
*2 Throughput depends on the combination of parameters.
New Product Overview
Features
1) Throughput：
Up to 400 tests/hour (for PT only or simultaneous PT/APTT testing)
For simultaneous testing of multiple parameters, such as D-Dimer,
throughput of 300 tests/hour (differs depending on parameters)
2) Allows simultaneous testing of mixed samples, such as capped blood-collection tubes, uncapped tubes and pediatric samples
3) Parameters:
Product photo 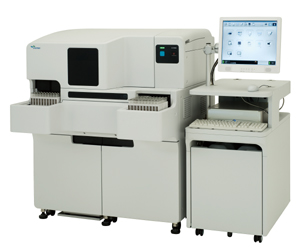